What's New from the CLSI Subcommittee on Antimicrobial Susceptibility Testing?

AUG 13, 2018 | ELIZABETH HIRSCH, PHARMD, RPH
The latest Clinical and Laboratory Standards Institute’s (CLSI) Subcommit­tee on Antimicrobial Susceptibility Testing meeting was held June 3-5, 2018, in San Diego, California. Although new and revised break­points included in this article are approved by the subcommit­tee, they are subject to change prior to official approval of the meeting minutes at the January 2019 meeting.

Ceftaroline is a cephalosporin with a broad spectrum of activity, including methicillin-resistant Staphylococcus aureus (MRSA). Its high affinity for penicillin-binding proteins (PBPs), including PBP2a in MRSA, contributes to its activity against MRSA.1 Ceftaroline is US Food and Drug Administration (FDA)-approved as a 600-mg dose every 12 hours (given over 5 to 60 minutes), while a high-dose regimen of 600 mg every 8 hours (given over 2 hours) has been approved for select indications in many countries outside the United States since 2017.

The in vitro activity of ceftaroline varies widely by geographic region, fueled by pandemic MRSA clones.2 Data from the SENTRY Antimicrobial Surveillance Program presented by Helio S. Sader, MD, from JMI Laboratories show that ceftaroline minimal inhibitory concentrations (MICs) for MRSA rarely exceed 1 mg/L within the United States, while the proportion of MICs greater than or equal to 2 mg/L is near 30% in some Latin American countries. In regions with greater than 15% ceftaroline-nonsusceptible MRSA isolates, correlation between disk diffusion and broth microdilution MICs are poor, with elevated error rates. Although the current CLSI breakpoints appeared appropriate to reduce these discrepancy errors in the United States, CLSI breakpoints are often used outside the United States. The European Committee on Antimicrobial Susceptibility Testing (EUCAST) has developed indication-specific breakpoints, with guidance surrounding dosing, but logistical implementation of these is often difficult.3 In light of all of the data presented, the Antimicrobial Susceptibility Testing (AST) Subcommittee approved revised breakpoints with a new susceptible-dose dependent (SDD) category based on the high-dose regimen (Table 1).

Although daptomycin is approved for the treatment of vancomycin-susceptible Enterococcus faecalis, it is often a workhorse agent for the treatment of vancomycin-resistant Enterococcus faecium where treatment options are limited. The FDA-approved dose of 6 mg/kg was primarily based on results from clinical trials for staphylococci whereas daptomycin MICs against E faecium are reportedly 2- to 4-fold higher than for staphylococci.4 Several studies’ findings have demonstrated worse clinical outcomes when daptomycin MICs are 3 to 4 mg/L versus less than or equal to 2 mg/L for patients with vancomycin-resistant Enterococcus (VRE) bacteremia treated with daptomycin.5,6 Additionally, several studies have reported improved outcomes for VRE bacteremia when using high-dose (≥8 mg/kg) therapy compared with the 6-mg/kg dose that is FDA approved for MRSA bloodstream infections.7,8 In addition to published data, unpublished modeling data generated by Avery et al from Hartford Hospital were reviewed. Their modeling suggested that with 6-mg/kg dosing, a susceptible breakpoint should be 1 to 2 mg/L while 10- to 12-mg/kg dosing suggested a susceptible breakpoint of 2 to 4 mg/L. The revised breakpoints approved by the AST Subcommittee are detailed in Table 1. Verbiage to be included with the SDD category includes “the SDD category is based on a dosage regimen of 8 to 12 mg/kg in adults and is intended for serious infections due to Enterococcus spp. Consultation with an infectious diseases specialist is recommended.”

Discussion of revised ciprofloxacin and levofloxacin break­points for Enterobacteriaceae and Pseudomonas aeruginosa has been ongoing at CLSI for several years. The AST Subcommittee voted to accept the revision of MIC breakpoints in 2017/2018 pending disk diffusion correlates data. New data were presented and are now sufficient to meet M23 criteria. Revised breakpoints for both ciprofloxacin and levofloxacin, projected for the 29th edition of the M100, were approved, as detailed in Table 1. 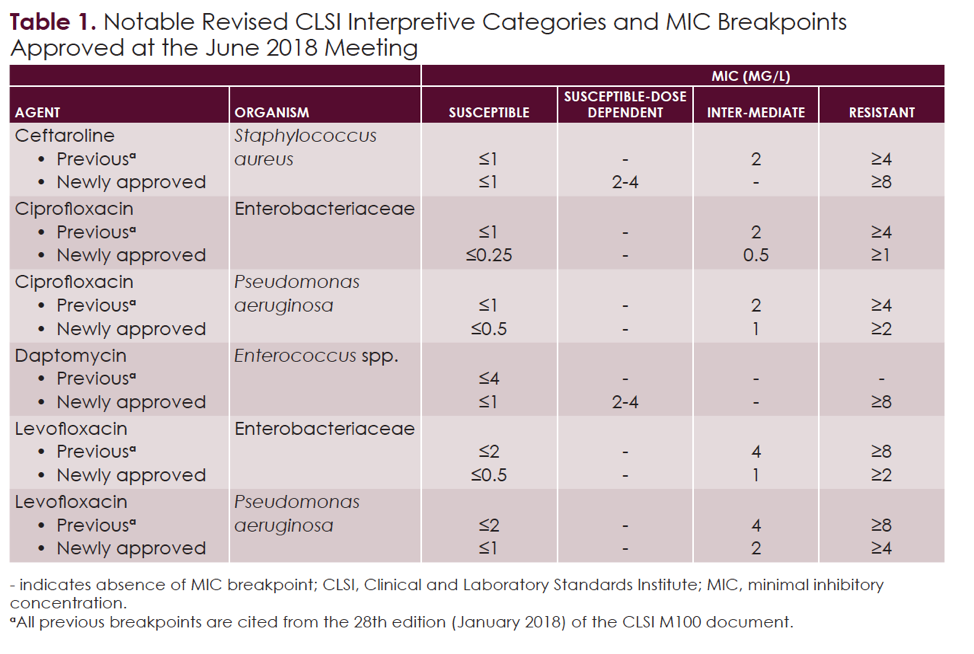 Cefiderocol is a novel siderophore cephalosporin undergoing clinical development; it is not yet approved by the FDA for use. Although its chemical structure is similar to cefepime, it is unique in that it forms chelating complexes with ferric iron and is transported across the outer membrane of gram-nega­tive bacteria via the active bacterial iron transport system.9 Once in the periplasmic space, the structure confers stability to both serine- and metallo-carbapenemases. It has shown in vitro activity against a broad range of problematic gram-nega­tive bacteria, including carbapenem-resistant Enterobacteriaceae, P aeruginosa, Acinetobacter baumannii, and Stenotrophomonas maltophilia.10 Over the last 30 years, several attempts to develop siderophore β-lactam compounds have been fruitless due to demonstration of adaptive resistance against some P aeru­ginosa strains.11

Navigating uncharted territory under the 21st Century Cures Act, sponsors can now approach CLSI as a standards devel­opment organization for guidance on clinical breakpoints prior to FDA approval.12 Cefiderocol is one of the first agents to be reviewed by CLSI prior to FDA approval. Detailed microbi­ology, pharmacokinetic/pharmacodynamic, and clinical data from a phase 3 complicated urinary tract infection study comparing cefiderocol to imipenem supplied by the sponsor were reviewed. Following extensive discussion, provisional breakpoints were approved for 4 organism groups: Enterobacteriaceae, P aerugi­nosa, A baumannii, and S maltophilia (Table 2). As provisional breakpoints, ongoing data review will take place as more clinical trial data become available.

Meropenem-vaborbactam, the latest β-lactam/β-lactamase inhib­itor (BLI) combination, was approved for use in the United States in 2017. Meropenem combined with vaborbactam, a novel cyclic boronate BLI, was designed to inhibit Class A serine carbapenemases, specifically the Klebsiella pneumoniae carbapenemase (KPC) enzyme.13 Although the drug has shown potent in vitro activity against KPC-producing isolates, including some resistant to ceftazidime-avibactam, the drug lacks activity against Class B metallo-β-lactamases and Class D β-lactamases.14 Data supporting the previously FDA-identified MIC interpretive criteria for Enterobacteriaceae (Table 2) were presented and subsequently approved for publication in the M100 document, with the FDA-approved dosage regimen of 4 g (2 g meropenem + 2 g vaborbactam) every 8 hours over a 3-hour infusion.

An ad hoc intermediate working group was charged with determining the fate of the intermediate CLSI category. The definition of this category is that it is “defined by a breakpoint that includes isolates with MICs or zone diameters within the intermediate range that approach usually attainable blood and tissue levels and for which response rates may be lower than for susceptible isolates.” Also noted in the definition is that “this category also includes a buffer zone, which should prevent small uncontrolled technical factors from causing major discrepancies in interpretations.”

Both EUCAST and the National Antimicrobial Susceptibility Testing Committee for the United States are currently operating under a majority 2-category breakpoint system (eg, susceptible and resistant) while CLSI has mostly 3-category breakpoints (eg, susceptible, intermediate, and resistant [S/I/R] or susceptible, SDD, and resistant [S/SDD/R]). The working group achieved consensus that all drugs should have a 3-category system to account for testing variability. Two options were presented for discussion. The first was S/I/R, eliminating the SDD category and revising the intermediate category. The second option was use of either S/I/R or S/ SDD/R, with revision to the intermediate definition that no longer includes drugs for which a higher dose or exposure can be used (to be SDD only). The committee was in favor of the second (eg, S/I/R or S/SDD/R) option, but no consensus was reached. The topic of intermediate categories has also been in discussion at EUCAST, and it appears that more dialogue is on the horizon for CLSI.
Dr. Hirsch is an assistant professor at the University of Minnesota College of Pharmacy in Minneapolis, Minnesota. Her translational research program focuses on the detection and treatment of resistant bacterial infections. She is an appointed advisor to the Clinical and Laboratory Standards Institute Subcommittee on Antimicrobial Susceptibility Testing.
References

MOST POPULAR ARTICLES
How Deadly Was the 2019-2020 Flu Season?
China Confirms Case of Bubonic Plague
Why Comparing Flu and COVID-19 Severity Is Not Equivalent
DAA Therapy for Hepatitis C Is Associated With Lower Disease-Related Costs
FEATURED