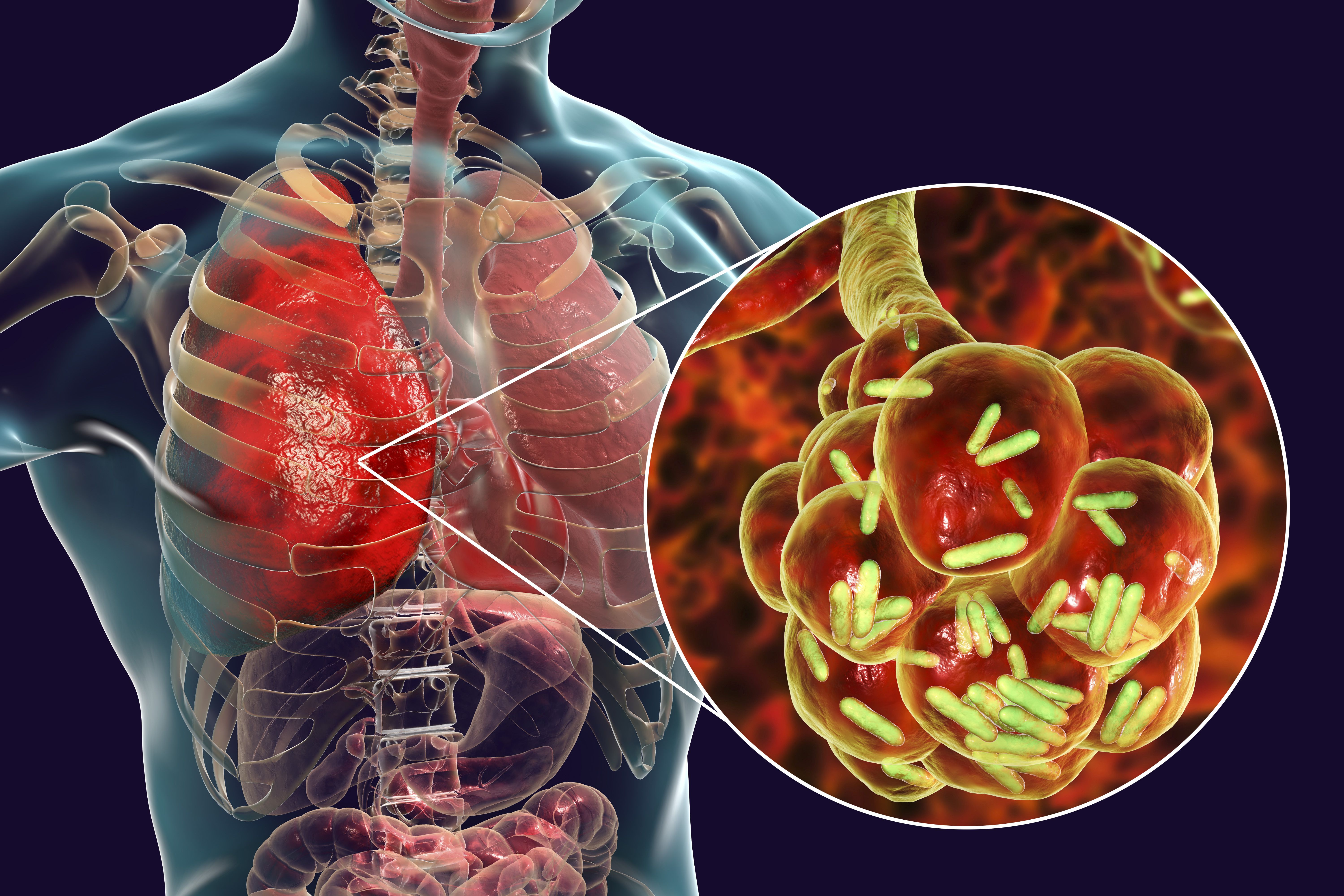 History of the Present Illness

A male, aged 21 years, presented to our emergency department with gunshot wounds to the right upper back and left anterior chest. He required needle decompression of the right chest prior to arrival due to hypotension and concern for pneumothorax. Upon arrival at the trauma bay, the patient was awake and alert. An initial exam was notable for bilateral lower extremity paralysis. A chest X-ray noted a widened mediastinum, and a CT scan of the chest identified tracheal injury, vertebral body fractures of the fourth and fifth thoracic vertebrae, pneumomediastinum, and pneumopericardium. The patient required emergent surgical stabilization, including median sternotomy, tracheal repair, and innominate vein ligation. The patient was initiated intraoperatively on veno-venous extracorporeal membrane oxygenation (VV-ECMO) and was then transferred to the surgical intensive care unit, intubated, and sedated.

Notable only for mild, intermittent asthma.

The patient was born in the United States and had never lived outside of Philadelphia. He reported frequent sightings of rodents on the streets near his home, but not inside his residence. Three pet cats lived in his residence and were without signs of illness prior to the patient’s presentation. He reported an isolated incident of handling live chickens 2 months prior to presentation. He denied recent travel. He had no significant family history, except that his grandmother had died from lung cancer. He smoked 1 pack of cigarettes daily.

On presentation to our hospital, the patient was awake and alert, saturating well with a nonrebreather mask delivering 15 L of oxygen per minute. His heart rate was 105 beats per minute. Other vital signs were within normal limits. He was noted to have a small abrasion over the right eye. Breath sounds were auscultated bilaterally. He had no sensation and had 0 of 5 strength in his lower extremities bilaterally. The rest of his exam was without obvious abnormalities.

Initial labs were notable for mild anemia with a hemoglobin level of 13.5 g/dL (14.0-17.5 g/dL) with a decrease to 8.9 g/dL within several hours of presentation. His basic metabolic panel was unremarkable. His initial lactic acid level was elevated at 8.1 mmol/L (0.5-0.2 mmol/L) with decrease to 4.2 mmol/L within several hours of presentation. A nasopharyngeal swab for severe acute respiratory syndrome coronavirus 2 was negative.

The patient remained hemodynamically stable and did not require further surgical intervention after hospital day 1 (HD1). The patient tolerated removal of his endotracheal tube on HD2 and removal of VV-ECMO on HD3. After removal of VV-ECMO, the patient became febrile with a temperature of 102.6°F and developed a productive cough. On HD4, blood and sputum cultures were collected and he was initiated on empiric piperacillin/tazobactam and vancomycin. On HD6, piperacillin/tazobactam was changed to meropenem due to persistent fevers. On HD7, a sputum culture that was collected on HD5 was noted to grow Bordetella hinzii and Acinetobacter baumanii. On HD7, additionally, 1 of 2 sets of blood cultures that were collected on HD3 were noted to grow Bordetella hinzii; sensitivities for this bacteria are not routinely performed. Infectious disease specialists were consulted at this time.

A repeat CT scan of the chest was obtained due to the patient’s persistent fevers, cough, and sputum culture results; it was notable for consolidative and ground glass opacities in the right lung apex and right lower lobe. These findings were felt to represent sequelae of pulmonary contusion. 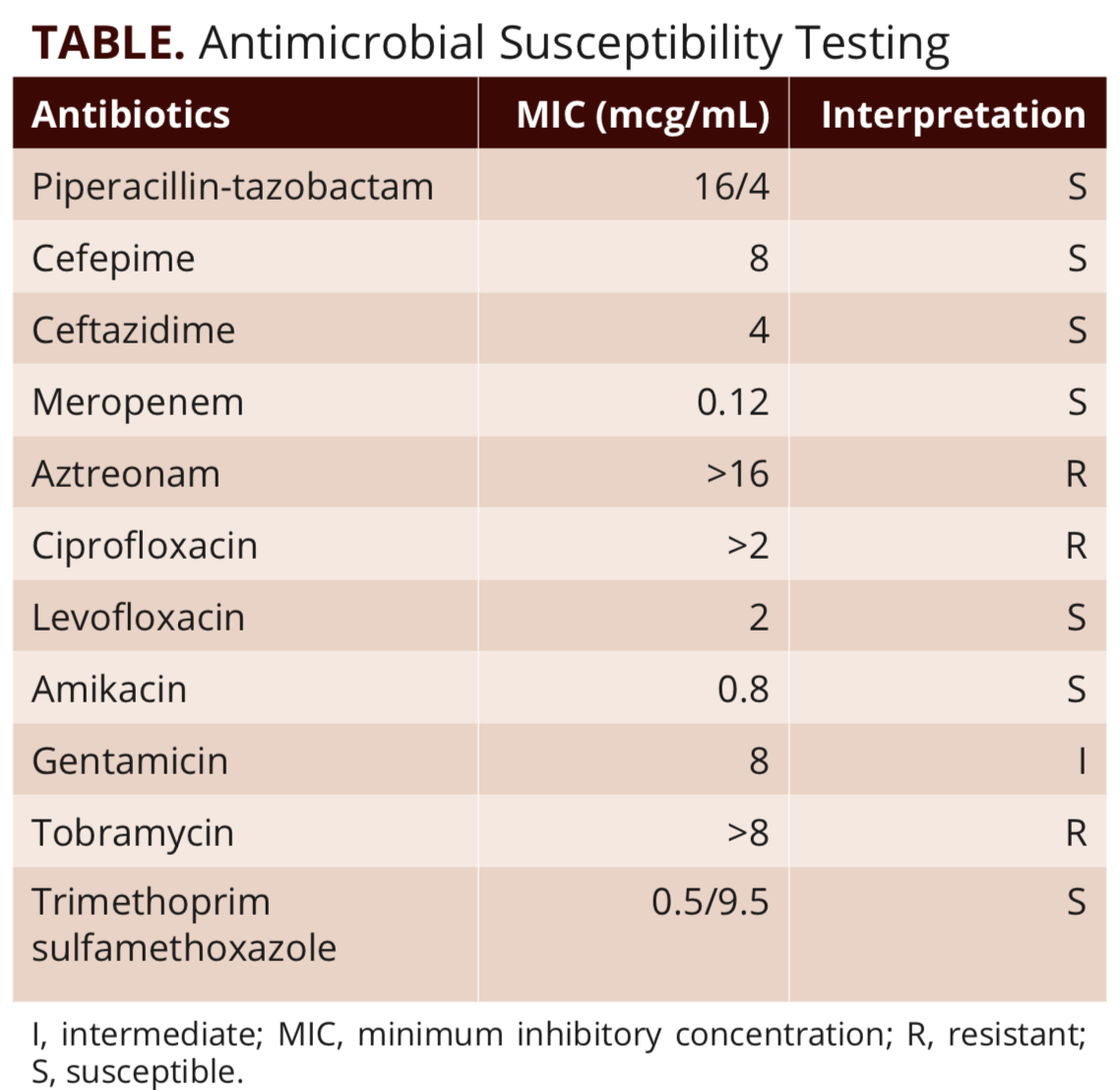 Due to unclear pathogenicity of the B hinzii noted in the patient’s blood cultures, a transthoracic echocardiogram was obtained; it did not demonstrate valvular vegetations or other evidence of endocarditis. Additionally, a HIV fourth-generation assay was nonreactive, and a HIV RNA level was below the level of detection.

The patient completed a 14-day course of meropenem at the recommendation of the infectious disease specialists. His fevers persisted for the first 5 days of antibiotic treatment, although with a progressive downtrend in his temperature curve. His fevers had completely resolved after 6 days of antibiotic treatment. Numerous subsequent blood cultures were without growth. He was discharged to a rehabilitation facility after a 19-day hospitalization.

Bordetella species are small, gram-negative coccobacilli.1 There are 10 known species of Bordetella, although many species are seldom encountered in clinical settings.1 The most common species to cause disease in humans is B pertussis, which is a highly transmissible organism that causes prolonged respiratory illness. With improved molecular testing, however, identification of new species in clinical centers is occurring with increasing frequency.

Bordetella hinzii was first identified as a cause of respiratory infection in poultry and more rarely has been isolated from rodents.2,3 The species was first reported in humans in 1994 as a cause of bacteremia in a patient with AIDS.4,5 Most reports of infection have occurred in immunocompromised patients and have presented as respiratory infection, cholangitis, bacteremia, and endocarditis.6-9 The organism’s pathogenic role, particularly in immunocompetent patients, remains poorly understood. To our knowledge, only 3 reports have described cases of symptomatic B hinzii infection in patients without underlying disease or immunocompromise. These cases presented as fatal bacteremia, respiratory infection, and cervical subcutaneous abscess.10-12

In this case, the exact route of transmission of B hinzii was unclear, but the patient did describe regular indirect exposure to rodents as well as recent direct handling of poultry, both of which are known reservoirs. The pathogenicity of B hinzii in this case was also uncertain. An additional organism, A. baumanii, was isolated from the patient’s sputum and could have been the primary pathogen responsible for his respiratory symptoms. Isolation of B hinzii from the blood in addition to the sputum, however, suggests systemic illness. Additionally, the patient’s fevers persisted for several days despite appropriate antimicrobial therapy based on later susceptibility testing. This suggests that his fevers were likely multifactorial in etiology given his preceding trauma and extensive surgical intervention, and not entirely attributable to B hinzii infection.

B hinzii is frequently resistant to many antibiotics.9 Prior reports have identified resistance to b-lactams, cephalosporins, macrolides, and fluoroquinolones.13 In this case, B hinzii was noted to be resistant to aztreonam, ciprofloxacin, and tobramycin, with intermediate susceptibility to gentamicin. The patient recovered well with a 14-day course of empiric meropenem, susceptibility to which was noted after completing treatment. This case, in addition to the in vitro sensitivity data reported in the literature,13 suggest that piperacillin/tazobactam and meropenem are reasonable empiric antibiotics in the treatment of B hinzii infection.

In summary, manifestations and outcomes of B hinzii infection are variable and further reports are needed to illustrate its pathogenicity and optimal treatment. Our case serves as one of few reports of B hinzii in an immunocompetent patient. Although rare, B hinzii will likely be identified more frequently in clinical settings due to increasing access to microbial identification technology such as matrix-assisted laser desorption/ionization time-of-flight mass spectrometry, and it should be considered as a potential pathogen in immunocompetent patients.

Novick is a first-year infectious disease fellow at Temple University Hospital in Philadelphia. She is interested in HIV, infectious sequelae of substance use disorders, and social determinants of health.

Moon is a fourth-year medical student at the Lewis Katz School of Medicine at Temple University in Philadelphia. She plans to pursue a residency in internal medicine.