An essential aspect of HCT is immunosuppression. Although this paves the way for transplant success, it can lay the patients open for infections that can be life-threatening, such as CMV infection. “CMV is one of the most common infections we see after transplant. In high-risk transplant patients, the rate can be upwards of 80%, with rates of 35% to 40% in lower-risk patients,” Roy F. Chemaly, MD, MPH, from the University of Texas MD Anderson Cancer Center in Houston, Texas told Contagion®. Dr. Chemaly was involved in the phase 2 and 3 trials.

The standard of care for CMV infection is intravenous (IV) ganciclovir or its oral prolog, valganciclovir, or the intravenous application of either foscarnet or cidofovir. These therapies work, but at the cost of adverse effects that include myelosuppression and renal toxicity. Therefore, they can only be used for a short time after the presence of the virus is detected. Having a prophylactic CMV option would be a game changer.

The high rates of CMV infection in transplant recipients are a consequence of the acquisition of CMV in the childhood years in most of us. The virus becomes latent and asymptomatic. Conditions like prolonged immunosuppression can spur its reactivation. The idea behind the use of letermovir, according to Dr. Chemaly, is that prophylactic therapy initiated soon after HCT can keep the virus in check and prevent infection.

The normal post-HCT strategy for the past 15 years or so has been to check the blood for the presence of CMV nucleic acid at a time when the person is still asymptomatic. If detected, antiviral treatment is begun pre-emptively for a short time to try and quell the infection. Prophylactic use has not been the norm because of the toxicities of the drugs. “What we are trying to do now with letermovir is to prevent the infection from even appearing in the blood. The drug’s efficacy and safety allow us to use it from the get-go during the high-risk period following transplantation,” explained Dr. Chemaly.

The latest trial conducted at 67 sites in 20 countries from June 2014 to March 2016 was spurred by data from a phase 2 dose-escalation trial (60, 120, and 240 mg/day, once-daily for 12 weeks) that demonstrated the efficacy and safety of letermovir 240 mg/day in preventing CMV infection in CMV-seropositive HCT recipients.

Of the 738 patients screened, 570 were randomized to oral or IV treatment with letermovir (480 mg/day or half that dose in patients receiving concomitant cyclosporine; n=376) or placebo (n=194) for 14 weeks following HCT, with a follow-up to week 48. Treatment began at a median of 9 days post-HCT. Two patients in each arm were not treated, for a final patient tally of 373 and 192 in the letermovir and placebo arm, respectively (total n=565).

All patients were ≥18 years of age and had undetectable plasma CMV when screened for participation. A variety of criteria were used to judge if patients were at high-risk of CMV infection; 32.4% and 28.1% of patients in the letermovir and placebo arms, respectively, were judged to be high-risk.

The week-48 all-cause death rate in patients who did not develop CS-CMVi was 19.7% in the letermovir arm and 18.3% in the placebo arm.

The causes of death were comparable in the 2 arms. Most common causes were acute myeloid leukemia, respiratory failure, graft-versus-host disease, sepsis, and septic shock.

“Letermovir was associated with lower all-cause mortality compared with placebo through week 24 and week 48 post-HCT, although these differences were not clinically significant. The risk of death associated with placebo versus letermovir was substantially higher in participants with CS-CMVi, despite the use of pre-emptive therapy, than in participants without CS-CMVi,” wrote the researchers.

They also noted that the risk of mortality in the subset of patients with CS-CMVi was lower in the letermovir group than in the placebo group, “suggesting that letermovir prophylaxis also affects mortality in participants who develop CMV.”

“I think that the phase 2 and 3 data are going to change the way we do things in HCT, with the use of a prevention strategy and a move away from a pre-emptive strategy,” said Dr. Chemaly. The data will inform the approval process, which is anticipated in the coming year. Further down the line, the treatment will be explored in solid organ transplants.

Brian Hoyle, PhD, is a medical and science writer and editor from Halifax, Nova Scotia, Canada. He has been a full-time freelance writer/editor for over 15 years. Prior to that, he was a research microbiologist and lab manager of a provincial government water testing lab. He can be reached at hoyle@square-rainbow.com. 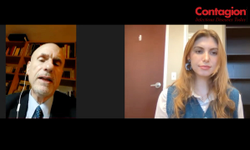