Outcomes of Pregnant Women with COVID-19 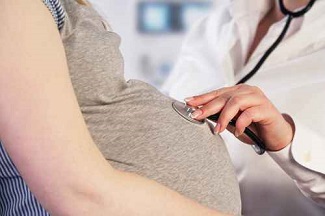 Pregnant women—especially those in their second and third trimesters—should employ social distancing practices as a precautionary measure to help prevent the spread of the novel coronavirus 2019 (COVID-19), according to a paper published in the BMJ.

Investigators from the UK observed pregnant women admitted to hospitals with confirmed COVID-19 between March 1-April 14 this year to identify the factors associated with coronavirus infection, and to describe the outcomes for mothers and their infants, including transmission from mother to child.

As the immune system changes during pregnancy, the study authors explained, pregnant women may become more vulnerable to COVID-19 and other infections. Other literature about pregnant women and their experience with COVID-19 suggests most babies were delivered by C-section, and most of the infants were asymptomatic and discharged home.

Mothers typically experienced mild or moderate symptoms such as cough, fever, and breathlessness, according to the study authors who summarized the findings of other papers.

In their population-based study, the investigators estimated there were about 86,000 pregnant women at the time, but ultimately 427 were admitted to the hospital with confirmed COVID-19 infection. The study authors said that accounted for an admission rate of about 5% of pregnant women per every 1000.

Symptoms presented at a median of 34 weeks and often included fever, cough, and breathlessness, investigators wrote. The women also cited symptoms such as tiredness, headache, limb of joint pain, sore throat, vomiting, diarrhea, and rhinorrhea. About half were from black and minority groups. Additionally, most of the women were in their third trimester.

At the time of the analysis, 266 women gave birth or had a pregnancy loss, leaving 161 who remained pregnant. About 10% required critical care, and of those, the majority were delivered owing to worsening respiratory condition. All of the women who were still pregnant after their critical care admission were discharged, investigators wrote.

There were 5 confirmed COVID-19 pregnant women who died, the team reported. Three of them died as a result of complications from COVID-19, and 2 died from other causes. There were also 4 miscarriages, occurring between 10-19 weeks gestation.

Furthermore, 3 babies were stillborn, and 2 died in the neonatal period. Of those, 3 of the deaths were unrelated to COVID-19 infections, while the cause of the remaining 2 deaths was unclear to the investigators.

As for mother-to-infant COVID-19 transmission, investigators determined that 12 infants tested positive for the virus. In fact, 6 of them tested positive for COVID-19 within 12 hours after their birth. Of those babies, 2 were from unassisted vaginal births, 4 were from C-sections, and 3 were pre-labor. Of the babies later diagnosed with COVID-19, 4 were born by pre-labor C-section and 2 were born via vaginal birth, investigators wrote.

Ongoing data collection on the outcomes of infection during pregnancies will continue to be a topic of priority, investigators concluded. That said, their data could provide information on overall infection rates or the risk of asymptomatic transmission.

“Unanswered questions remain about the extent and effect of asymptomatic or mild infection,” they wrote. “Serological studies, as well as those using retrospective data to identify women with either confirmed or presumed mild infection in pregnancy, will be essential to fully assess potential effects such as congenital anomalies, miscarriage, or intrauterine fetal growth restriction.”
To stay informed on the latest in infectious disease news and developments, please sign up for our weekly newsletter.