Ebola Virus Can Persist in Wastewater for Over a Week 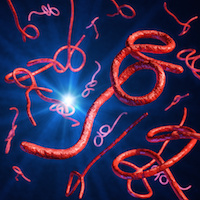 Current epidemic response procedures may change due to the finding that the Ebola virus can persist in wastewater longer than previously believed.

The understanding has been that Ebola can only be transmitted through direct contact with bodily fluids. However, a recent study revealed that the virus can live on steel and plastic for days.

Another report documented that even an Ebola-free blood test result doesn’t necessarily mean that a patient is no longer infected. Now, researchers from the University of Pittsburgh (Pitt), Drexel University, and the National Institutes of Health (NIH) have found evidence indicating that the deadly disease can persist in wastewater for at least eight days.

“Initial research by the [World Health Organization] WHO and [Centers for Disease Control and Prevention] CDC recommended disposing of Ebola-contaminated liquid waste into a latrine or treatment system without disinfection because of the virus wasn’t expected to persist in wastewater,” principal investigator Kyle J. Bibby, assistant professor of civil and environmental engineering at Pitt’s Swanson School of Engineering, said in a news release.

However, the findings published in Environmental Science & Technology Letters tell a very different story. Using two samples with different concentrations of Ebola, the team studied the viral particles over the course of eight days. After the first day, the viral particle concentration decreased by 99%; however, the remaining particles were still detectable by day eight. The authors pointed out that the significant decrease early on may be because the virus attaches to other particles in the water, not because it is dying, which could make detection even more challenging.

Not only do the results indicate that Ebola is more persistent than previously believed, but it also means that the virus has another pathway for transmission. A patient infected with Ebola can produce up to nine liters of liquid waste each day; therefore, even greater precautions should be taken when handling contaminated liquid waste.

“While the Ebola virus was found to be generally less persistent than enteric viruses in wastewater, the identified survival period might suggest a potential of a wastewater exposure route,” explained co-author Charles Haas, of Drexel University.

The researchers suggest holding contaminated liquids for longer before releasing them into sewage systems – a practice the WHO has already began. They also propose to pretreat the contaminated liquids with chlorine or another antiviral agent in order to disinfect the waste.

“These results indicate that further research is needed with a more holistic approach to assessment of Ebola-infect wastewater, from storage to treatment to disposal and continued monitoring, including a precautionary approach to wastewater handling in all epidemic responses,” Bibby concluded.

MOST POPULAR ARTICLES
RLF-100 Could Reduce Ventilator Use, Viral Replication in Severe COVID-19
How Deadly Was the 2019-2020 Flu Season?
FDA, Advocacy Group Clash Over Hydroxychloroquine
Why Comparing Flu and COVID-19 Severity Is Not Equivalent