Differences in C difficile Diagnostics Blunt the Benefits of Bezlotoxumab

Bezlotoxumab, a human monoclonal anti­body directed against Clostridioides diffi­cile toxin B, is currently indicated for the prevention of recurrent C diffi­cile infection (rCDI). Its US Food and Drug Administration approval follows the results of 2 phase 3 trials, MODIFY I and MODIFY II, which have shown significantly lower rates of rCDI at 12 weeks with the use of bezlotoxumab compared with placebo.1

In these trials, a number of different labo­ratory tests were used to diagnose C difficile infection (CDI), as summarized in the Table. In brief, these tests detect either the organism with the capacity to produce harmful toxin (ie, toxigenic culture [TC], polymerase chain reaction [PCR]) or the presence of major toxins directly in the stool (ie, enzyme immu­noassay [EIA], cell cytotoxicity assay [CCA]). Having a heterogeneous mix of diagnostic tests presents an issue with interpreting results of MODIFY I/II. Recent evidence suggests that although detecting the presence of toxigenic C difficile is highly sensitive, these tests on their own have poor positive predic­tive value of true clinical disease.2,3 As a result, bezlotoxumab’s effect may have been dimin­ished due to inclusion of false-positive CDI cases in these trials. Through post hoc analysis of MODIFY I/II, Wilcox and colleagues sought to further differentiate the clinical impact of bezlotoxumab between cases diagnosed through the presence of toxigenic C difficile versus direct toxin detection.4 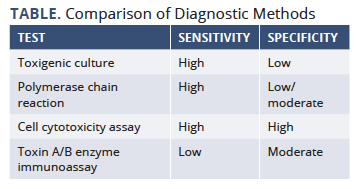 Patients from MODIFY I/II were included for analysis if they received bezlotoxumab or placebo as study drug. Each treatment group was subdivided into those whose disease was diagnosed via PCR or TC (PCR/TC) and those with disease diagnosed via EIA or CCA (EIA/CCA). Although patients in the EIA/CCA group included only toxin-positive patients, those in the PCR/TC group notably included both toxin-positive and toxin-negative patients because of differences in diagnostic algorithms.

The primary end points of interest were the rates of initial clinical cure and rCDI. Out of concern for bezlotoxumab causing a false negative in subsequent toxin testing because of its toxin-neutralizing effect, an assay inter­ference experiment was performed to control for any confounding.

From the pooled MODIFY I/II population, 781 patients who received bezlotoxumab and 773 who received placebo were included for analysis. Within each group, there was a near-even split number of patients whose disease was diagnosed through either PCR/TC or EIA/ CCA. Baseline demographics were mostly well balanced across all 4 study arms and were notable for a population aged 60 to 70 years, with a slight female predominance. Apparent differences between the 2 diagnostic arms included a higher rate of inpatient diagnosis and severe CDI in cases diagnosed via EIA/ CCA. Notably, there was a consistent majority (range, 70.9%-80.1%) of patients across all arms with at least 1 predefined risk factor for rCDI, which includes CDI history in the past 6 months, severe CDI per the Zar score, age >65 years, infection with a hypervirulent strain, and immunosuppression.

Overall, initial clinical cure rates were similar between the bezlotoxumab (82.3%) and placebo (78.1%) groups. Comparing by diag­nostic methods, however, showed a higher rate of initial cure in cases diagnosed using EIA/CCA (bezlotoxumab, 81.7% vs placebo, 82.9%) compared with PCR/TC (bezlotoxumab, 78.4% vs placebo, 77.7%). Bezlotoxumab reduced rCDI rates regardless of diagnostic method, as shown in the Figure. Although the therapeutic differences in both diagnostic groups were statistically significant, the relative rCDI reduc­tion with bezlotoxumab was more pronounced in those tested via EIA/CCA compared with PCR/TC (46.6% vs 29.1%). In the assay interfer­ence experiment, bezlotoxumab did not appear to affect diagnostic EIA results but may result in false positives for samples tested by CCA.

Findings from this post hoc analysis add further credence to acknowledging the differences in CDI diagnostic modalities. The clinical impact of bezlotoxumab becomes more evident in patients whose disease was diagnosed via EIA/CCA, suggesting that a proportion of recipients whose disease was diagnosed using PCR/TC may not have been truly infected. Although the current iteration of CDI guidelines still does not give strong recommendations regarding the optimal diagnostic method,5 this study sheds additional light on the limitations of detecting the presence of toxigenic C difficile on its own, with additional stewardship implications to suggest that poorer predictive value can lead to unnecessary treat­ment and use of bezlotoxumab. Lee is an infectious diseases clinical pharmacy specialist at the Hospital of the University of Pennsylvania in Philadelphia, PA. Her practice areas include inpatient antimicrobial stewardship, as well as the transition & monitoring of patients receiving outpatient parenteral antimicrobial therapy.
References