DEC 04, 2019 | BY DEBRA GOFF, PHARMD**; PAUL SAX, MD; AND CARLOS DEL RIO, MD
“Tell me and I forget. Teach me and I remember. Involve me and I learn.” These time-honored words of wisdom from Benjamin Franklin hold true today in medical and pharmacy education as the field advances into social media. Twitter represents a significant evolution in how information is developed and shared, including between people who otherwise would not have been able to connect. Twitter flattens the existent hierarchy, is immediate, and allows timely dissemination of relevant infectious diseases (ID) informa­tion beyond the reach of traditional education methods. Twitter can be an appropriate peda­gogical tool to foster collaborative learning, engagement, and advocacy.

The way students and residents learn is rapidly changing. Currently, most medical and pharmacy students, residents, and early career physicians and pharmacists belong to the millennial generation, consisting of individ­uals born between 1980 and 1999. Millennials prefer a broad spectrum of learning strategies, with fewer lectures and more collaboration with peers.1

Millennials grew up with social media as an integral part of life. Facebook, Twitter, Instagram, and Snapchat were founded between 2004 and 2011. Most ID mentors and educators are from the baby boomer generation, born from 1946 to 1964. An “old dog” mentor must be willing to learn “new tricks” to educate the next generation of health care providers. Our purpose is to review how we use Twitter to educate, advocate, and engage others in various ID topics. Take a look at our list of popular accounts (Table 1) and a list of handles for the accounts of relevant and influential clinicians and advocates in the space (Table 2). 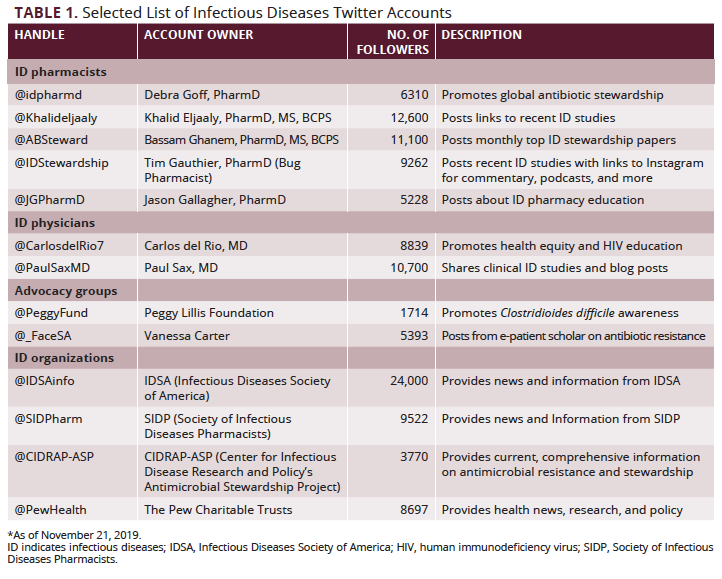 Surgeons prescribe almost 40% of all antibiotics at The Ohio State University Wexner Medical Center (OSUWMC), a 1500-bed academic teaching hospital. I asked the division director and chair of the Department of Surgery if he had any ideas on how to provide real-time education on emerging resistant organisms. His answer: Twitter. He stated, “Surgeons love short, concise snip­pets of information. Twitter provides that. We jump on Twitter throughout the day in between surgical cases.” He introduced me to Ben Nwomeh, MD (@BNwomeh), the Twitter account of a pediatric surgeon with over 5000 followers.

I proposed a study: I wanted to find out if Twitter could engage surgeons in topics related to antibiotic resistance and stew­ardship. We did surgical grand rounds on Twitter for Antibiotic Stewardship and recruited surgeons for our study. We found that Twitter did indeed engage surgeons in ID topics relevant to surgeons.2 Our most retweeted tweet was on the University of California, Los Angeles outbreak of carbapenem-resistant Klebsiella pneumoniae transmitted by contaminated duodenoscopes during endoscopic retrograde cholangiopan­creatography procedures.3 My tweet was linked to a PubMed abstract that described treatment options for carbapenem-resistant K pneumoniae. Over 3000 people viewed the tweet. That was the start of my journey on Twitter for ID.

I tweet about research papers from ID journals; however, my tweets are targeted to specific audiences. For example, for a study on postoperative infections, my tweet will include several surgeons. For a study on joint implant infections, I will tweet a link to the PubMed abstract or the open access paper to orthopedic surgeons. Live tweeting from conferences such as IDWeek offers a way to increase the event’s reach to people who are not in attendance. I frequently tweet and add photos from global travel related to my work in antibiotic stewardship.

Twitter helps me engage with a large, diverse group of people from around the world on a variety of topics related to anti­biotic stewardship. With the growing number of new antibiotic resistance reports, I find people posting abstracts, papers, and presen­tations on related cutting-edge data. My time on Twitter has led to many positive experiences, such as research with Twitter contacts, invitations to speak at national and international conferences, an invita­tion to the new social media committee at OSUWMC, and coauthoring this paper with Twitter friends.

I have always been a bit of a gadget nut and follow quite closely the writing of David Pogue, a tech writer for multiple venues—most famously, The New York Times. When he first described how Twitter could provide a crowdsourced answer to problems very quickly, it seemed like magic, and I instantly signed up. Surely this would have an application in medicine, where we frequently strive to find expert opinion to help our patients.

However, like most people who initially join, I didn’t really get it, and my account lay dormant for years. I also confess that certain horror stories about people being fools on Twitter kept me away. Why would anyone care about some stranger’s trite observations? Or worse, why open oneself up to potential criti­cism or, even worse, aggressive attacks?

Two things changed: First, some of my colleagues mentioned how they learned about important ID papers or conference presenta­tions on Twitter, and I wanted to share that immediacy. Second, one of my editors at NEJM Journal Watch said it would be a great way to engage further with the people who read my writing. When I became editor in chief of Open Forum Infectious Diseases, I saw how commonly content posted on Twitter gener­ated discussion and comment, usually for the better. That it did so from every level of medical training and from all health profes­sionals only added to the value. Some of the very best ID content on Twitter is emphati­cally from ID pharmacists.

Here’s a simple example of how Twitter can be useful to all of us practicing clinical ID: When the OVIVA study of oral therapy for osteomyelitis was first presented at the 2017 European Congress of Clinical Microbiology & Infectious Disease—a conference I’ve never been to—I was able to see the presented slides years before the study was ( finally) published and without traveling to Europe. The authors of that trial have been great on Twitter, engaging with people who had ques­tions about the study after it was published. Their input was critical for a review of OVIVA I wrote for NEJM Journal Watch, and I thank them for that.

Most of what I post is related to ID and my particular focus within it, which is HIV. However, I am a rabid baseball fan, love good writing of any sort, and think dogs are a great gift to humankind. As a result, I follow not only ID and other interesting medical experts but also really talented baseball analysts, writers, and journalists in many diverse fields, as well as the requisite cute dog accounts. If you’re not following Thoughts of Dog (@dog_ feelings) or WeRateDogs (@dog_rates), what are you waiting for?

I first realized the power of Twitter during the last presiden­tial election and shortly thereafter decided to join in, hoping to have my voice heard in an environ­ment where I increasingly saw policies being implemented that were directly affecting my patients’ ability to receive appropriate care. I am passionate about health equity; thus, my first entry into Twitter was as a means of advocacy. I quickly learned that Twitter is also a powerful tool for education and dissemina­tion of research, as well as for connecting with colleagues around the world in ways that I had never imagined.

I confess that I probably spend too much time on Twitter and probably Tweet too much, but I am someone who is always reading and looking up things. I have a thirst for knowl­edge and love to share information with others. I find Twitter quite useful in my role as editor at NEJM Journal Watch because I can read articles that I would have never accessed before. Twitter also allows me to engage with investigators in amazing ways and to virtu­ally attend a meeting. As director of the @ EmoryCFAR Twitter account, I can disseminate the research of our investigators and increase their impact.

Twitter is also a great way to engage with ID fellows, residents, and medical students. For example, when I round, I like to contribute to #IDDailyPearl; when I am not on service, following that hashtag allows me to learn from colleagues who are posting interesting cases. At Emory University Hospital, we have daily micro­biology rounds, and following #MicroRounds is a great way to be part of microbiology rounds without being there. Thus, I learn from Twitter as much as or probably more than I teach on Twitter, but that is part of the fun.

I work in global health, and Twitter provides an amazing way to connect with colleagues around the globe. Although 66% of my followers are in the United States, the other 34% are in 117 countries, from Mexico to South Sudan, which allows me to be part of a community interested in sharing information and improving health globally.

Finally, I go back to where I started: advo­cacy. In times of injustice and where the most vulnerable don’t have a voice, I continue to rely on Twitter to fight for that which I believe in. From ending gun violence with the hashtag #ThisIsOurLane to fighting for gender equity and ending sexual harassment in medicine with the hashtag #heforshe, Twitter allows me to increasingly engage in the public debate and, hopefully, contribute to trans­forming society for the better. 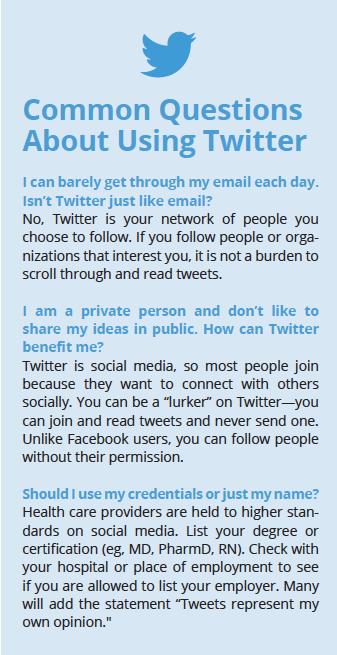