Candida Auris: The Rise of a New Fungal Threat

Candida auris&mdash;Are we prepared for another multidrug-resistant pathogen?

In June 2016, the Centers for Disease Control and Prevention (CDC) issued an alert regarding an emerging fungal pathogen of concern, Candida auris.1 The organism was first described in 2009 after being isolated from the external ear canal of a patient in Japan; however, the first known isolation of the organism occurred in a Korean pediatric surgery patient with fungemia in 1996.2 Since then, there have been reports of infections due to this organism from more than fifteen countries across multiple continents.3

Scientists Lockhart et al. conducted phylogenetic studies on isolates of C. auris from all over the world. They identified that the genetics of the isolates evaluated appeared to fall into 4 distinct clades with genetic diversity within each clade being relatively minimal. These clusters have appeared almost simultaneously and correlate with the 4 geographic regions from which they were isolated: South Asia, South Africa, South America, and Asia.2 Within the United States between 2013 and May 12, 2017, infections due to C. auris have been observed with increasing frequency and geographic distribution. A total of 77 infections have been reported, originating from New York, New Jersey, Massachusetts, Maryland, Indiana, Oklahoma, and Illinois with a bulk of these cases having been reported in New York and New Jersey (Figure 1).4,5

Of these infections, 55% were identified in male patients, the median age was 70 years (range 21-96 yrs), and the most common culture types in which the organism was isolated was blood (58%), urine (14%), and respiratory samples (10%).5 Genomic analysis of cases seen in the United States has shown that the organisms isolated in New York and New Jersey are genetically similar to strains originating from South Asia, whereas cases in Illinois stem from organisms originating in South America.5,6

C. auris is known to have a virulence profile more similar to C. albicans than other nonalbicans Candida species, and has been associated with multiple cases of fungemia and other invasive fungal infections.7 Acquisition appears to be largely health care-acquired in nature. More specifically, one report of 41 patients with C. auris infection showed that the median time between admission and first isolation was 19 days. Of these 41 patients, 73% had central venous catheters, 61% had urinary catheters, 51% had received some form of surgery within 90 days of diagnosis with C. auris infection, and 41% had received antifungal therapy within 90 days of diagnosis of C. auris infection.2

Further illustration of this organism’s ability to be spread patient-to-patient is demonstrated by the asymptomatic colonization of close contacts of those with active infection. Three hundred and ninety close contacts of the first 77 infected patients in the United States were screened for C. auris colonization using axillary and groin swabs. Forty-five of these individuals (12%) were found to be colonized with the organism (Figure 2).5 Additionally, patients with a previous infection may remained colonized with this organism for weeks to months after treatment of the acute infection.6 Even more troubling, C. auris appears to survive on surfaces within an infected patient’s hospital environment. The organism has been isolated from beds, windowsills, chairs, infusion pumps, and other various surfaces in the rooms of patients with active infections.5 These factors likely contribute to the potential for patient-to-patient spread in a healthcare environment, which raises major concern given the observed mortality rate of roughly 60% in patients infected with C. auris.6 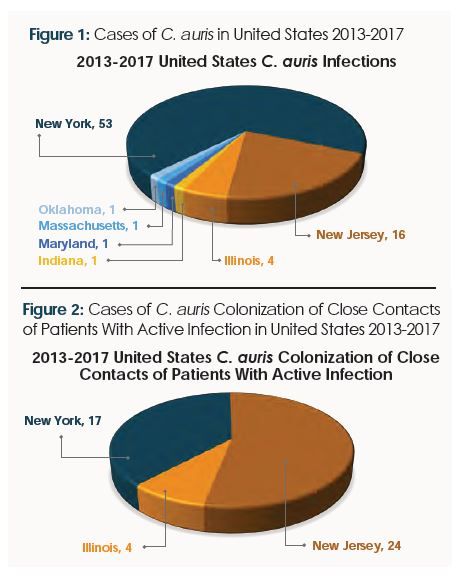 This organism can be especially difficult to identify with standard laboratory methods. It is frequently misidentified as C. saki or Rhodotorula glutinis by API 20C yeast identification system or as C. haemulonii by both the BD Phoenix system as well as Vitek-2.8 Diag&shy;nostic confirmation by molecular sequencing or Matrix Assisted Laser Desorption/Ionization Time-of-Flight (MALDI-TOF) mass analysis should be considered in several circumstances to avoid misidentification and delay of effective therapy for infections due to C. auris. A complete set of recommen&shy;dations for when diagnos&shy;tic confirmation should be considered for possible C. auris infection are available from the CDC.8

One final characteristic that makes C. auris particularly concerning as an emerging pathogen is its lack of susceptibility to commonly used antifungals. Early case reports and small case se&shy;ries have shown high rates of multidrug resistance in C. auris isolates, including some strains with elevated mini-mum inhibitory con&shy;centrations (MICs) to all 3 major classes of antifungal medications.6 These reports are confounded by the fact that susceptibility break-points for C. auris have not yet been formally established. In the interim, the CDC has recommended the use of MIC susceptibility breakpoints derived from other closely related Candida species.8

Antifungal resistance in C. auris is mediated through genome mutations and by the organism’s ability to form biofilms. Genome analysis of C. auris has revealed several amino acid substitutions within the Erg11 gene which encodes the fungal cytochrome p450 enzyme that is targeted by azole antifungals.2 Mutations within the gene prevent azole binding and confer resistance. Interestingly, this same mutation has been found in C. albicans and similarly results in high level resistance to fluconazole. Other resistance mechanisms to other antifungal agents by C. auris have yet to be described. Additionally, C. auris readily forms biofilms on polymeric surfaces. In vitro studies have found that caspofungin, while effective against planktonic C. auris cultures, is inactive against C. auris biofilms.9 Other Candida species like C. albicans are also known to form biofilms, but typically remain highly susceptible to caspofungin. Biofilm formation makes re&shy;moval of catheters and other indwelling lines critical in the management and prevention of systemic C. auris infections.

There are no formal treat&shy;ment guidelines published specifically for the prevention and management of C. auris infection. Several agencies, including the CDC, have published interim recommendations for the diagnosis and management of C. auris based on clinical practice experi&shy;ence and the limited case se&shy;ries that have been published so far.8 The CDC recommends that an echinocandin be used for empiric therapy. If patient do not respond to empiric echinocandin therapy, they should be switched to ther&shy;apy with liposomal amphotericin B. Dosing recommendations are included in these interim guidelines, and given the severity of these infections, a careful evaluation of patient-specific phar&shy;macokinetic factors is warranted.8 There are no pub&shy;lished recommendations that advocate for empiric dual antifungal treatment. C. auris is not specifically men&shy;tioned in the 2016 Infectious Diseases Society of America (IDSA) Clinical Practice Guideline for the Management of Candidiasis; however, the CDC’s recommended em&shy;piric treatment regimens for C. auris align with the ID&shy;SA’s 2016 candidiasis guidelines which also recommend that an echinocandin be used as the first line agent for the initial therapy for treatment of invasive candidiasis in non-neutropenic patients.10

While much about C. auris and its mechanisms of antifungal resistance have yet to be described in full, case reports and descriptions of its virulence show that it will likely pose a significant challenge to clinicians across the globe as it continues to emerge. Further research, as well as continued development of novel antifungal agents, will be necessary to effectively treat and prevent the spread of this emerging pathogen.

Dr. Stevens graduated with a doctor of pharmacy from the University of Montana in 2010. He is the infectious diseases clinical pharmacy specialist at Providence Alaska Medical Center, where he developed and imple&shy;mented a comprehensive antimicrobial stewardship program in 2013. He is an active member of SIDP.

Dr. Barany graduated with a bachelors of science in marine biology from Western Washington University in 2010. He received his PharmD from the University of Washington School of Pharmacy in 2016. He is currently a PGY1 pharmacy practice resident at Providence Alaska Medical Center in Anchorage, Alaska. 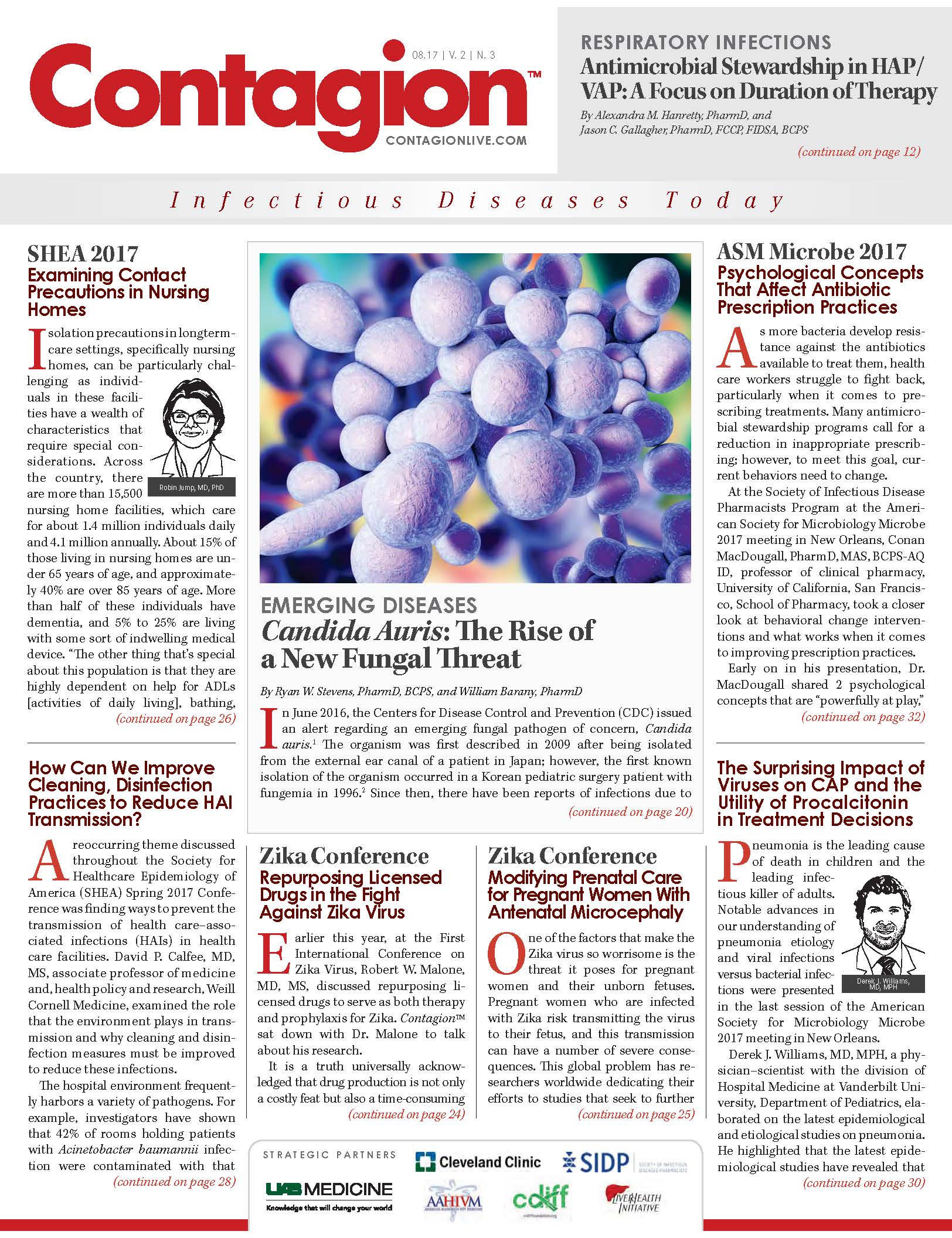 Antimicrobial Stewardship in HAP / VAP: A Focus on Duration of Therapy
Seizing the Opportunity in Emerging Health Care Threats
Candida Auris: The Rise of a New Fungal Threat
A Long-Term Care Antimicrobial Stewardship Certificate Program for Pharmacists: Filling an Unmet Need
Geographic Expansion of Lyme Disease Emphasizes Importance of Recognizing Modes of Transmission
Risk for Cancer-Causing Infections Highest in Low- and Middle-Income Countries
What Can We Learn From Outbreaks of HIV and Zika?
Treatment as Prevention: A Comprehensive Approach to Hepatitis C Virus in Persons Who Inject Drugs
Guidelines to Caring for Patients With Sepsis: Promise or Progress?
Related Videos
Related Content